December 01, 2018
As the story goes, when I was 4-years-old I was mesmerized by the 1980 Winter Olympics in Lake Placid, yes the Miracle on Ice hockey team, but also by the Luge. I don't know why, but every 4 years when the Winter Olympics come around, my parents always told me, "When you were little you loved to watch the luge."

Fast forward nearly four decades and I see a posting for a luge clinic in Palo Alto for kids 9-13. It was called a sledder search and I thought it would be a fun experience for Ellie to go "sled" in Palo Alto, then the next time the Winter Olympics came around, she could say "I tried that."

We went to Palo Alto in early September, Ellie got geared up and went down the hill on her street sled. It wasn't pretty, at least I didn't think it was. She crashed into the hay bails once, got up pretty upset -- mainly because she wasn't excellent at it right away. She left Palo Alto nearly in tears because she couldn't be great at it. Steph and I tried to explain this was just for fun; a chance to try something new, heck, check another sport off the list of things she's tried.

Jump ahead about a month and I receive an email from USA Luge saying that Ellie was being invited to Lake Placid to tryout for the Junior National Luge Team. About 600 kids tryout at these clinics throughout the country, and they selected the top 60. Clearly, I have no idea how to judge a luger (not even sure if that's the right word).

We got the packet of information (which was a bit overwhelming the amount of forms and things that needed to be submitted), made travel reservations and were set for an adventure. 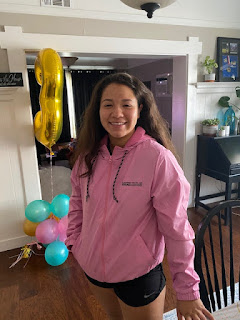 September always bring big changes. Ellie's birthday, and this year it was a milestone. 13. An official teenager. And although we weren't able to do a full birthday bash, she was able to spend time with her best friends. Hopefully we'll be able to fully celebrate soon. That's the one thing that COVID has really done. It has robbed us of the moments. While we talk about celebrating birthdays, anniversaries and everything in between the longer this goes, the more we'll be ready to just move on. Which is a real bummer. The house got a little bit of a makeover with new hardwood floors. Its been a long time coming, but the carpet is gone and the hardwood is in every room. It looks good, but does require a lot more swiffering. COVID-19 has us distancing learning and 4th grade is hard. For me and Lukas. More so because he can't get the attention he needs. We have to piece it together between work calls and meetings, and work with him on things that we aren't fully 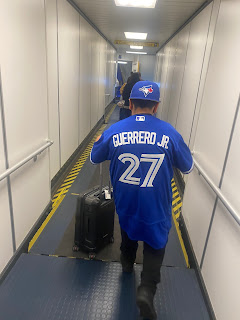 For Lukas' 11th birthday I designed a baseball journal for him that has all of the MLB stadiums, so he can document his travels to all the ballparks. Boarding the flight. Game ready! To go along with the journal we decided to do a boys trip to LA for a few baseball games. He initially wanted to go to Toronto (passport issue. He doesn't have one yet.), then Boston (flight costs got out of control before I could book it.) so LA it was. We flew out of San Jose at 8:00 a.m., got into Orange County just after 9:00 a.m. and were at our hotel about 20 minutes later. Lukas might be my spirit animal when it comes to travel packing. He packed everything he needed on one side of a carryon-sized piece of luggage. I used the other side, and we were set. Both of us, everything we needed, one carryon. We're staying at the TownePlace Suites by Marriott, which is less than a 5 minute walk to Angel Stadium. It actually takes longer to walk through the parking lot than it does walking from th